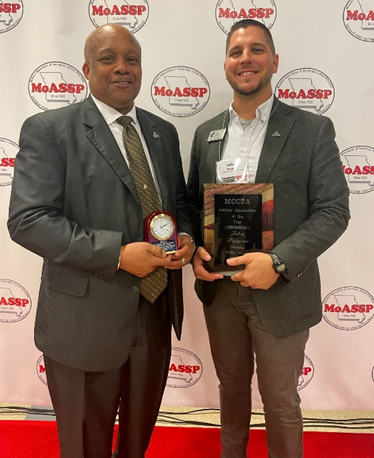 Yearwood, Columbia Public Schools Superintendent, was given this award based on his contributions to Career and Technical Education within CPS and Missouri. Last April, he helped pass the $80 million bond issue, in which a portion is designated for renovating the CACC-South Campus near Rock Bridge High School. Construction is slated to begin this summer.

Higgins has made his mark on career and technical education over the past ten years. He worked in the construction industry in various positions before starting his career in education as a construction technology instructor at the CTC at Fort Osage. He later worked as an adult education coordinator and counselor at Boonslick Technical Education Center for one year before joining the administrative team at CACC.

Higgins has a variety of responsibilities at CACC, including primary support of Facilities (three locations), Safety & Security, Transportation, and Technology. He is also leading efforts centered around community and employer engagement. Through this work, Higgins leads innovation in work-based learning and advisory.