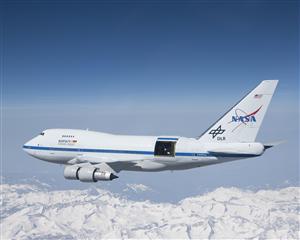 Two Columbia Public Schools teachers are among 22 educators selected to fly on NASA's Stratospheric Observatory for Infrared Astronomy (SOFIA), the world's largest flying telescope, in 2016.
Rex Beltz, a science teacher at Rock Bridge High School, and Melanie Knocke, Columbia Public Schools' planetarium supervisor, will join the SOFIA team as Airborne Astronomy Ambassadors. Exact flight dates have not been announced.
The observatory flies from its home base in Palmdale, California, and the Airborne Astronomy Ambassadors will work side by side with astronomer teams witnessing all stages of scientific research, from preparations to observations to data analysis and publication. They will normally fly aboard the observatory twice, and then implement classroom lessons and public outreach programs based on their experiences.
SOFIA's Airborne Astronomy Ambassadors program began in 2010 and has flown 106 educators from 31 U.S. states and the District of Columbia, as well as eight from Germany, on science flights from 2010 through 2015.
SOFIA is an extensively modified Boeing 747SP jetliner equipped with a 100-inch (2.5-meter) diameter telescope. The observatory enables the analysis of infrared light to study the formation of stars and planets; chemistry of interstellar gases; composition of comets, asteroids, and planets;  and supermassive black holes at the center of galaxies.
News release
More information about SOFIA
SOFIA studies

The Columbia Public School District does not discriminate on the basis of race, color, religion, gender identity, gender expression, sex, sexual orientation, national origin, ancestry, disability, age, or use of leave protected by the Family and Medical Leave Act, in its programs, activities, or with regard to employment. The Columbia Board of Education is an equal opportunity employer. Inquiries regarding Columbia Public Schools’ compliance with IDEA and Section 504 regulations should contact Special Services at 1818 West Worley, Columbia MO, 65203 (573) 214-3462.